Many might argue that the Australian Schools Rugby Union has given us a steadier supply of wonderful Wallabies over the last fifty years than any other organisation.

Brother Bob Wallace has had an involvement with the Australian Schools Rugby Union since it’s inception in 1972. Br Wallace was also Headmaster at SEC for 18 years.

He was initially an ACT delegate to this organisation but became Secretary in 1976. He held that position till 1992 when he became President.

Brother Bob Wallace retired as President of the Australian Schools Rugby Union at a formal dinner in his honour on Saturday night in Sydney. Here is contribution to schoolboy rugby was acknowledged.

Many will also remember him for his involvement at St Edmunds Canberra. He finished here in 1988  He moved from there to Waverley College till 2004.

At each school he was Deputy and Headmaster as well as rugby coach.

He was Manager of the Invincible Schoolboy team of 1977-78. 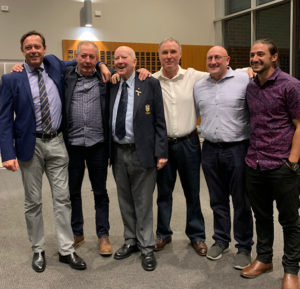