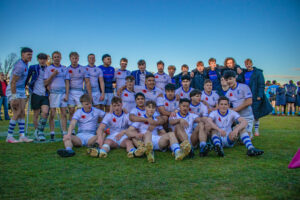 On this past weekend, many boys of all ages who partake in the school’s rugby programs participated in Heritage Round. This was a weekend where Eddie’s old boys could return to the school for their reunion, and all Eddie’s rugby teams played off against Marist in a battle of the ages, both teams playing for not just their schools, but for the pride that accompanies such a significant win.

The most significant win of course was the St Edmund’s First XV rugby team coming out on top, beating their Marist counterparts 36-20 in a grueling game, with both teams fighting for the badge and their school cohorts who showed up on the day to show their pride and support for their respective teams. Similarly, although not playing against Marist, the St Edmunds First XI came out victorious against their opponents with a 3-1 win against Majura, putting them in contention to win it all at the end of the season.

The atmosphere in the grandstand on the day was astonishing, with many boys from all year groups coming to every game to support their friends and fellow Eddie’s brothers. The pride displayed by both Eddies and Marist boys on the day was incredible. Whether their team was winning or losing, both team’s fans remained respectful with their chants and language, and overall, it was a greatly successful day for both schools.

On a different note, we have the annual sleepout quickly approaching, taking place on Friday the 16th of September. The purpose of this night is to raise money for Home in Queanbeyan and Karinya House, as well as allowing the boys to pause for a moment in reflection and consider those who have slept rough through this cold winter in Canberra. This is a night where boys come to school, receive a cup of warm soup prepared by our very own Hospitality teachers, and get involved with a few activities throughout the night. Once the activities conclude, the boys then spend the night sleeping in the college gymnasium, allowing them to get a sense for how homeless people live. This is an important event in the St Edmunds calendar, and we encourage any boy who can attend to do so.