2019 is a very special year for the college, representing the 65th anniversary since its foundation. St Edmund’s War Memorial College was opened in 1954 by the Christian Brothers as a response to an outcry from Catholic parents in the region. Since then, St Edmund’s College has remained the oldest continuing Catholic college in Canberra. The anniversary year was celebrated on Thursday the 2nd of May, at St. Christopher’s Cathedral, Manuka during our Founders Day Mass. It was gratifying to see so many important individuals attending the mass, including previous staff and principals of the college, as well as principals from other colleges across Canberra.

Prior to the mass, the students received a badge to wear on their blazers, symbolising the 65 years that the school has been running. As a student myself, it was pleasing to see the participation and enthusiasm that everyone brought to the mass. The Cathedral echoed as the college choir led the way when singing the hymns. The same sense of college pride was carried on even after the mass when we travelled back to school to participate in the annual Market Day. Students were asked to bring a change of clothes and a handful of gold coins to participate in various activities that the senior boys were running. Activities included classic catch challenges, as well as basketball and soccer competitions. There was also a variety of foods for the staff and students to buy lunch, including sausage sandwiches, bacon and egg rolls, chips and hotdogs. I found myself helping run the BBQ for O’Brien house. The money raised throughout the afternoon will go towards the school for future improvements.

The end of the day saw the whole school situated at the college grandstand participating in the college Tug of War competition. Hayden House saw themselves on top winning the house competition, the Year 6 students overpowered the Year 6 staff, and the Year 12 team convincingly defeated the reigning champion Staff side. I would just like to reiterate what a fantastic start to term two of 2019 has been. I hope that as a college we can continue to keep the ball rolling for the rest of the year, continuing to participate in our winter co-curricula’s but more importantly maintaining our high academic standards

Edmunds to the fore. 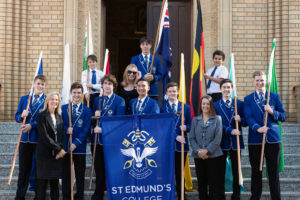 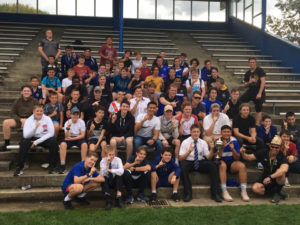