To the students, parents and members of our wider community.

As always, over this past week, our College halls have been filled with laughter and cheerfulness from the members of staff and students that fill them. This has been complemented with numerous activities that have been taking place. The most notable of these was the “R u ok day”, last Thursday. This is an annual event where the College joins in with the wider community to promote the awareness of mental health. The phrase “R u ok?” itself, is extremely powerful, but without taking any significance away from the question, the real importance is in the reply or the reaction. Our students were encouraged to ask the question first, but secondly adapt to the situation in which his mate replied. If for any reason, he wasn’t ok, we were encouraged to talk to him and remind him that a problem shared, is a problem halved. If the situation was much worse than what a mate could deal with, the student was then asked to approach an adult and let the adult take the appropriate measures.

On Thursday, in recognition of “R u ok day”, we also held a staff versus student’s basketball game. While this didn’t have anything exactly tied to the message of the day, it was used to have a bit of a joke around and have some fun. We had a gymnasium full of boys and it was an overall success which contributed to the all-round vibe of the day. I know that a number of staff members were feeling it after the game, and in particular, Mr Richardson could barely walk. 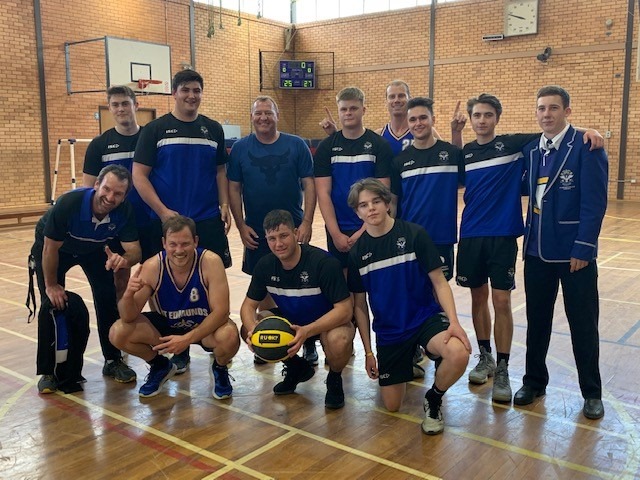 Last Friday, we held a full school assembly. The assembly was focused around the Br Matt McKeon service awards which were unfortunately announced during quarantine earlier this year. Congratulations to everyone that received one. It was great to see that a number of staff members, old boys and current students were recipients of the awards. We also acknowledged numerous staff members for their continued commitment to the college. The standout staff member in this category was Mr Di Fronzo from the Junior school. This year was 30th year working at the College and it was evident from all the boys during their round of applause, that he is, and always has been an extremely important figure in the school.

With warmer weather quickly coming into sight, it seems as though the entire student body is excitedly getting prepared to put their blazers away for the year and begin wearing short sleeve shirts and shorts. With warmer weather quickly coming into sight, it also means that we will shortly see the conclusion of our winter sports. Rugby players are currently entering their last round of the year. For a number of teams, this is an important week as the outcome of this game will determine if they make the grand final or not. We have a number of teams who are already guaranteed a spot in the grand final, and to the them, we wish the best of luck. I have also heard from a member of staff that our soccer teams are performing well and having fun while doing so. Keep building momentum, and hopefully by the pointy end if the season, you will be firing on all cylinders.

I hope everyone has a good and safe week.