Flynn is only 11 years old and his creative side is making history with his YouTube music collection that he has created in memory of Mr C.J. (Chris Uren, known as uncle Chris to Flynn. His mother’s late husband). Flynn was recently in the Adelaide Advertiser and the NT News for his hard work and dedication to hours of work uploading Chris’ Uren’s music. Chris Uren was a multi-instrumentalist singer/songwriter. The release of the music is tragically special as Chris died in a helicopter crash in the Northern Territory on the 5 June 2002, he was just 36.

Mr Uren’s lyric rich music captures his love for the land where he died. His music was inspired by the harsh beauty of nature. Until now, his music was difficult to access as his 57 songs with lyrics were all on CD’s. Flynn has dedicated endless hours to honouring Chris. The marathon effort is timed to commemorate the 20th anniversary of Mr Uren’s death.

“I enjoyed uploading all the Mr C.J. music videos onto YouTube because I got to listen to all the great songs.”

There are currently 5 albums available through the YouTube channel – Archeology, Erebus, And So Forth, Polymath & Ironmonger, with further collaborative music to be added over time.

Chris’ family and his mother are so extremely grateful and proud of Flynn dedicating his time to celebrate his uncle. Flynn is looking forward to using his digital, musical and creative talents at St Edmunds, with the school musical just around the corner! 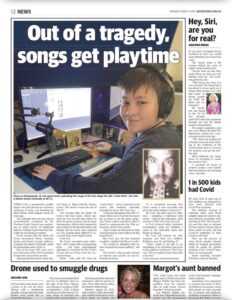 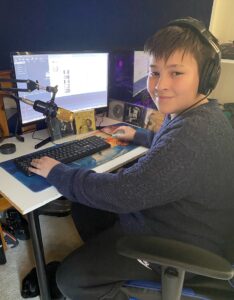 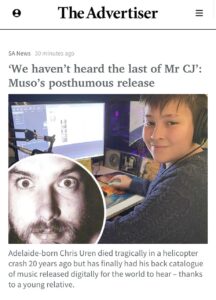