“Start by doing what is necessary; Then do what’s possible; And suddenly you are doing the impossible.” St Francis of Assisi

The Saints breathe life into the Catholic Church through their example of faith. The above quote by St Francis is an inspirational quote to live by. Their collective wisdom and approach to life gives hope to respond to all the challenges we face. 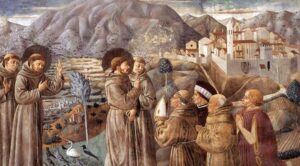 Saint Francis of Assisi’s Story
The patron saint of Italy, Francis of Assisi was a poor little man who astounded and inspired the Church by taking the gospel literally—not in a narrow fundamentalist sense, but by actually following all that Jesus said and did, joyfully, without limit, and without a sense of self-importance.

Serious illness brought the young Francis to see the emptiness of his frolicking life as leader of Assisi’s youth. Prayer—lengthy and difficult—led him to a self-emptying like that of Christ, climaxed by embracing a leper he met on the road. It symbolized his complete obedience to what he had heard in prayer: “Francis! Everything you have loved and desired in the flesh it is your duty to despise and hate, if you wish to know my will. And when you have begun this, all that now seems sweet and lovely to you will become intolerable and bitter, but all that you used to avoid will turn itself to great sweetness and exceeding joy.”

From the cross in the neglected field-chapel of San Damiano, Christ told him, “Francis, go out and build up my house, for it is nearly falling down.” Francis became the totally poor and humble workman.

He must have suspected a deeper meaning to “build up my house.” But he would have been content to be for the rest of his life the poor “nothing” man actually putting brick on brick in abandoned chapels. He gave up all his possessions, piling even his clothes before his earthly father—who was demanding restitution for Francis’ “gifts” to the poor—so that he would be totally free to say, “Our Father in heaven.” He was, for a time, considered to be a religious fanatic, begging from door to door when he could not get money for his work, evoking sadness or disgust to the hearts of his former friends, ridicule from the unthinking.

But genuineness will tell. A few people began to realize that this man was actually trying to be Christian. He really believed what Jesus said: “Announce the kingdom! Possess no gold or silver or copper in your purses, no traveling bag, no sandals, no staff” (Luke 9:1-3).

Francis’ first rule for his followers was a collection of texts from the Gospels. He had no intention of founding an order, but once it began he protected it and accepted all the legal structures needed to support it. His devotion and loyalty to the Church were absolute and highly exemplary at a time when various movements of reform tended to break the Church’s unity.

Francis was torn between a life devoted entirely to prayer and a life of active preaching of the Good News. He decided in favor of the latter, but always returned to solitude when he could. He wanted to be a missionary in Syria or in Africa, but was prevented by shipwreck and illness in both cases. He did try to convert the sultan of Egypt during the Fifth Crusade.

During the last years of his relatively short life, he died at 44, Francis was half blind and seriously ill.

Reflection
Francis of Assisi was poor only that he might be Christ-like.

In Sundays Gospel Jesus challenges a man to give up all his worldly possessions and follow him. The man finds this challenging as he is a wealthy man and will have to give up much. In contemporary society we can get lost always wanting more of everything. A better car, a bigger house, the latest clothes and material possessions. These things that can plague our thoughts are just items and Jesus is calling us into a richer encounter. St Francis accepted this encounter with love and humility as he helped those that were poor and marginalised.

Jesus was setting out on a journey when a man ran up, knelt before him and put this question to him, ‘Good master, what must I do to inherit eternal life?’ Jesus said to him, ‘Why do you call me good? No one is good but God alone. You know the commandments: You must not kill; You must not commit adultery; You must not steal; You must not bring false witness; You must not defraud; Honour your father and mother.’ And he said to him, ‘Master, I have kept all these from my earliest days.’ Jesus looked steadily at him and loved him, and he said, ‘There is one thing you lack. Go and sell everything you own and give the money to the poor, and you will have treasure in heaven; then come, follow me.’ But his face fell at these words and he went away sad, for he was a man of great wealth.

Dear Lord,
We pray that we can become instruments of God’s love… 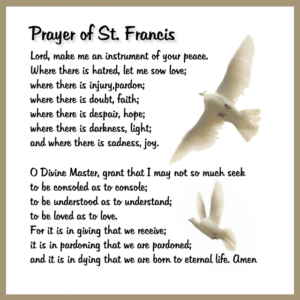