St Edmund’s College is embarking on its very first overseas football tour in January 2020. This tour represents a key component of the football program at St Edmund’s College and is heavily linked to our regular Capital Football competition. The opportunity to visit the home of football and immerse ourselves in footballing experiences both on and off the pitch is immeasurably valuable to our Eddies players and teams. On the tour we will play a number of tour matches and the experience of competing against high level, quality opponents will provide the team with the necessary formation and development required to compete in the Capital Football competition. Players will gain football knowledge and skills through the tour and it will also be a strong team building activity and will provide an intensive football environment. The tour includes 2 Premier League fixtures plus numerous stadium tours and training ground visits to clubs such as Manchester United, Manchester City, Arsenal and Tottenham Hotspurs. Other activities include a training session and tour of St George’s Park, home of the England football team, Wembley stadium tour, Millennium stadium tour and sightseeing activities in Manchester, Liverpool Cardiff and London. The tour will be both a football and cultural experience for the players who will have the opportunity to visit numerous iconic landmarks in London such as the Houses of Parliament, Big Ben, Trafalgar Square and St Paul’s Cathedral. Overall, the tour is seen as crucial in the future development of the First XI and the long term vision of football at St Edmund’s College. 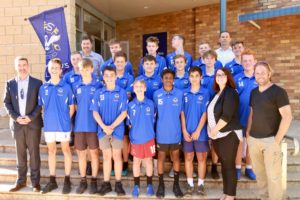 The tour will run from Tuesday 7th January to Friday 25th January. Parents and members of the Eddies community can keep up to date and follow the tour via the Eddies Football Facebook page https://www.facebook.com/groups/stedmundsfootball/ On behalf of the players and parents of the tour I would like to thank and acknowledge the following sponsors for their generous support of the tour. Without them, this tour simply could not happen.

The following is a list of the tour group: